What’s a Sound, or a Fjord?

It is an old glacier joining the mountain to the sea. When the glacier melted, the sea occupied the empty space, and created the fjord/sound. It’s therefore the sea entering the land for several kilometers. It’s the way how Doubtful and Milford sound were created.

The weather in a sound it’s also a part of the experience. The Fiordland region is the most rainy in New-Zealand. They have an average of 200 days of rain each year, which allow a thick layer of green moss to develop. The cliffs on the side of the sounds are covered by this green moss and the trees roots grow up threw it. This surface isn’t therefore very stable and as the trees weight increases, it’s not unusual to see a tree avalanche swept away by the weight of the water or the snow. 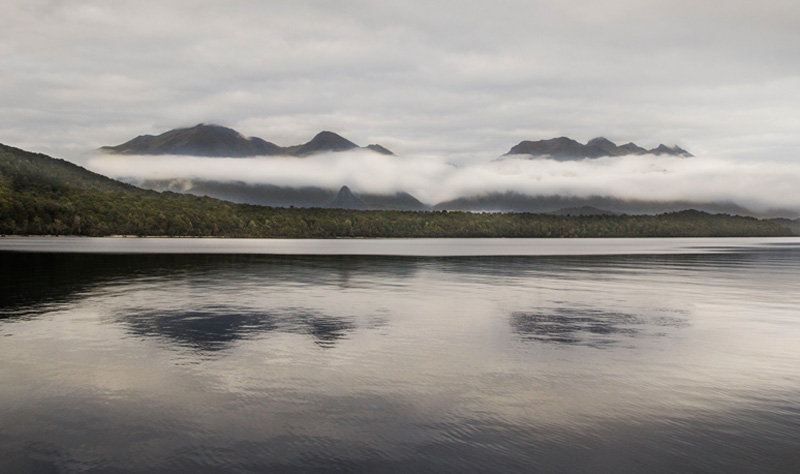 We went to Te Anau and because of the unstable weather forecast had to make a choice between Doubtful and Milford sound. We knew we will go back to Milford sound with our family when they will be here so we chose to visit Doubtful sound and booked our tickets for the cruise. It’s one of the most expensive activities we did in New-Zealand. 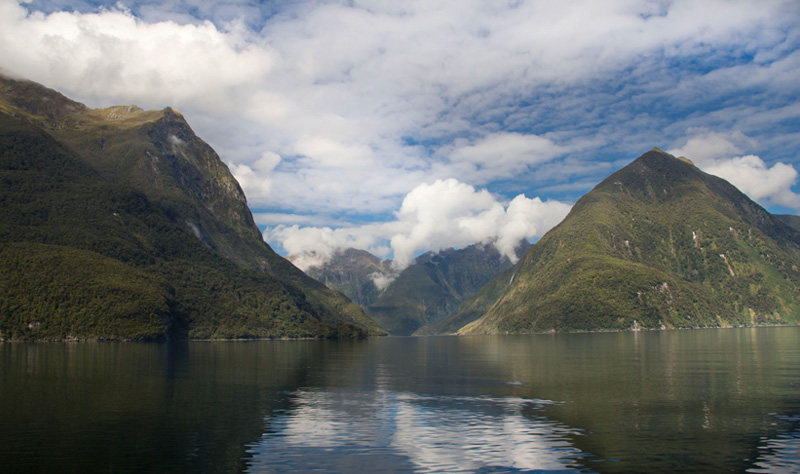 The price of the cruise involves a large number of components but is certainly the cause of low tourist attendance.

The first step of the journey had us taking a first boat through the Manapouri Lake. After an hour cruising through mountains we discovered the big power plant, which feeds a large part of the region in electricity.
The sound is then only accessible through one road, the only road of the country not connected to any other. It’s also the road that cost the government the most money. An average of 2 dollars per square centimeter. 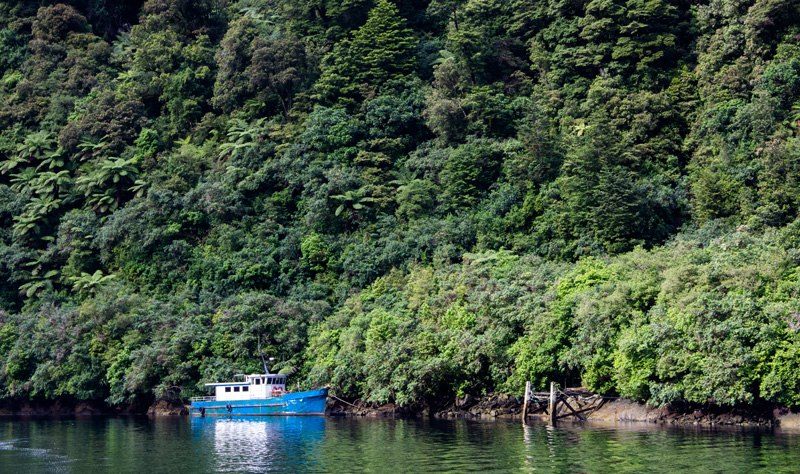 We jumped in the bus taking visitors from the power plant to the Doubtfull Sound entry where a nice cruise boat was awaiting us. Unlimited coffee and tea there, good for all people not being an early bird. The price of the cruise also includes the boat crew and guide, it’s nice at the beginning and you learn a lot about what you see. 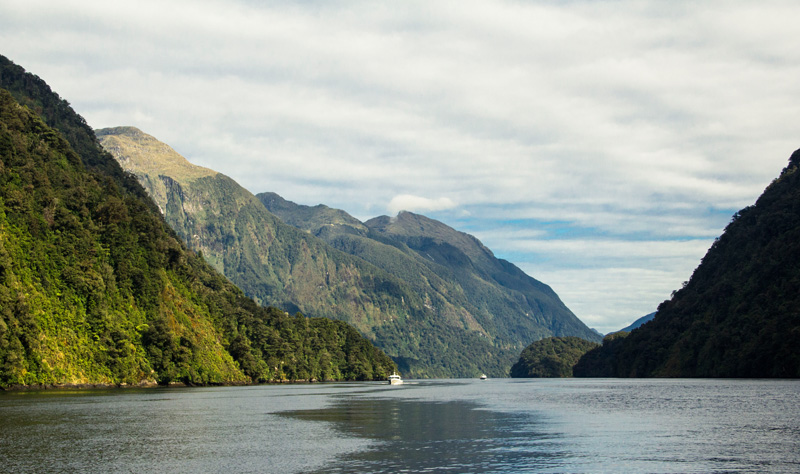 The Doubtful Sound was discovered by James Cook in 1977, he avoided to sail inside thinking the sound wasn’t passable. In 1793 a spanish team went inside the sound to do some scientific experiences. At the same time they draw a map of the sound, it’s the reason why you will find some places with spanish names here, the only one in the entire country. The first name James Cook gave to the sound was Doubtful Harbour but the whaler gave it its actual name. Its Maori name is Patea, which means « the place of silence» and it’s surprising when the captain stops the engine for a short time to hear nothing else around but nature and birds. 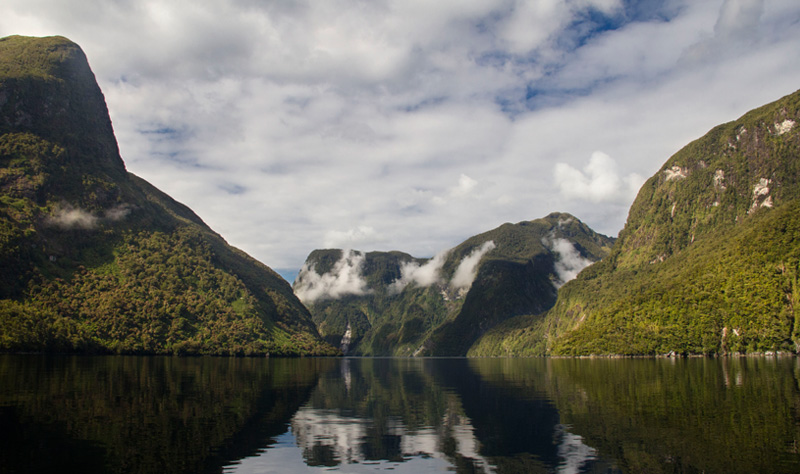 The sound has a particular ecosystem. The water in the Sounds is made of a top layer of fresh water on the surface, deep of only a few meters and coming from rivers and snowmelt that doesn’t mix with the seawater below. The sun does not properly pierce through the two layers of water. As a result, there is a important quantity of living species living close to the surface.
We should have normally seen a group of dolphins with up to 70 subjects but no luck for us we didn’t see any. Same actually for blue penguins and seals. However, we had great weather, a sunny day all along. This was really nice, moreover when you know the place is most of the time rainy. 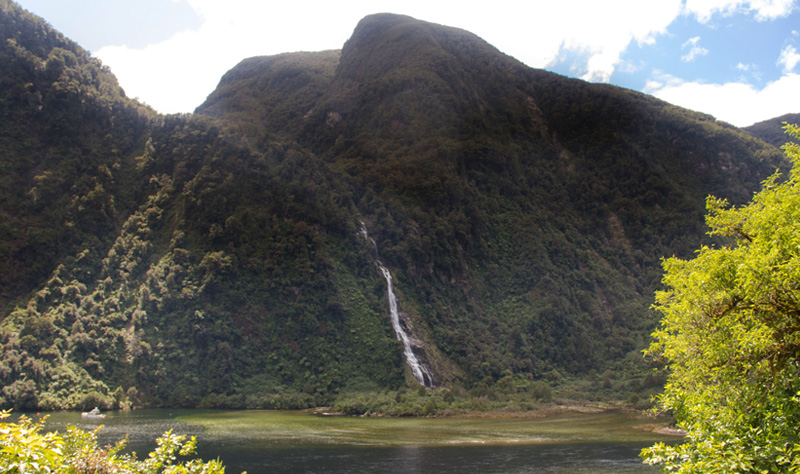 To organize this cruise, we booked our tickets with the information center in Te Anau. We had all the information there and we checked the weather with them to be sure we will live a nice experience. It’s not negligible when you pay 200 dollars per person. We travelled with Real Journey who is also offering to spend a night in the Sound. Of course the price will be much higher but you will have the opportunity to do some kayak for exemple to see the waterfall really close and live an incredibly quiet experience in this area, far from all human life.

To discover Milford sound, we chose the easy way. We were in Queenstown with our family and even if we wanted to spend at least two days in the parc we couldn’t, for a matter of time. We found a daytrip for approximately 100 dollars per person, including the bus, the cruise on the sound and the visit of the underwater observatory on bookme.co.nz. A good deal for a cheap price. 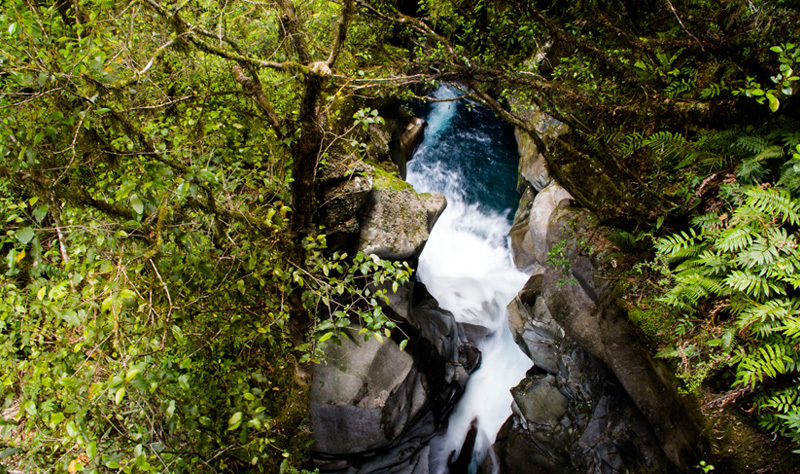 Milford is one of the most visited place in all New-Zealand with an average of 550 000 persons a year. So on top of checking the weather I would advise you also to check if you are going there during the school holiday before booking your tickets. Best remains apparently weekdays and possibly around lunchtime.

Just like Doubtful Sound, Capitain Cook discovered Milford Sound in 1770. At the end of the XVIIIe century, some seal hunters settled in the Sound and by 1820, they killed almost all the seal population in the area. The name of the sound is a homage to a welsh harbour, the Milford haven. In addition to seal hunting, the sound as been a gold mining site. In 1888, Donald Sutherland, pioneer and gold digger, was commissioned to build the track from the sound to the Sutherland falls, the track was finished in 6 month . Over time, the trail would be extended to reach Te Anau Lake at Mackinnon Pass, it’s the story of the Milford track, one of the Great walk in New-Zealand.

The sound is actually 15km inside the land and reach a maximal depth of 400m below see level. Its Maori name is Piopiotahi, means « a single piopio » in relation with a Maori legend.

The particularity of the water in the Sound, similar to Doubdtful Sound, : fresh water above seawater, two distinct layers which never mixes and blocks the light. This has enable the development of black coral reefs here that are normally only found in deep ocean. Its possible to see them from the underwater observatory build within the Sound. The Milford Sound deep underwater observatory allow the public to discover the nature and wildlife hiding under the water of the Sound. On the surface we discovered the stories around the sound, and a staircase allows us to go down to the depths of 10m to admire the famous black corals and fishes who made of this unusual habitat a home. 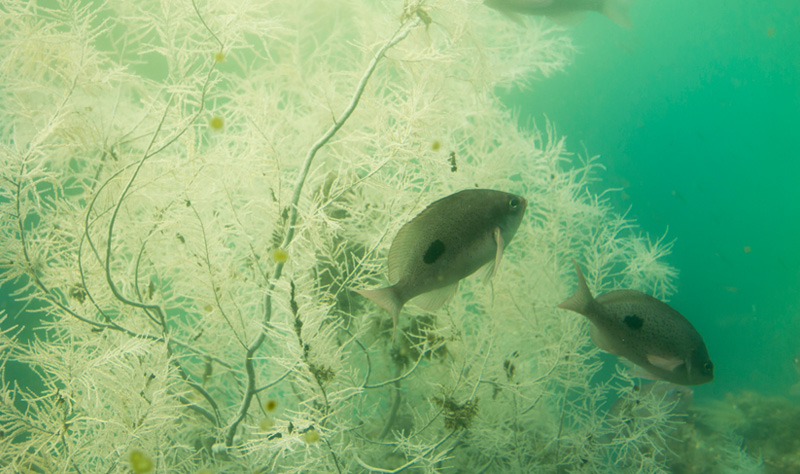 After over 4h in a bus, stuck to the window to admire the landscape, we finally arrived to the Sound harbour. The cruise is shorter than Doubtful sound but the show is just as beautiful. The captain told us before taking off that we will probably not be able to see dolphins this day because they saw them during the morning cruise and the dolphin group known to be in the area generally moves from a sound to an other, but this day the luck was with us and we finally enjoyed the show of 5-6 dolphins playing with the wave created by the boat and we also saw some seals soaking in the sun. 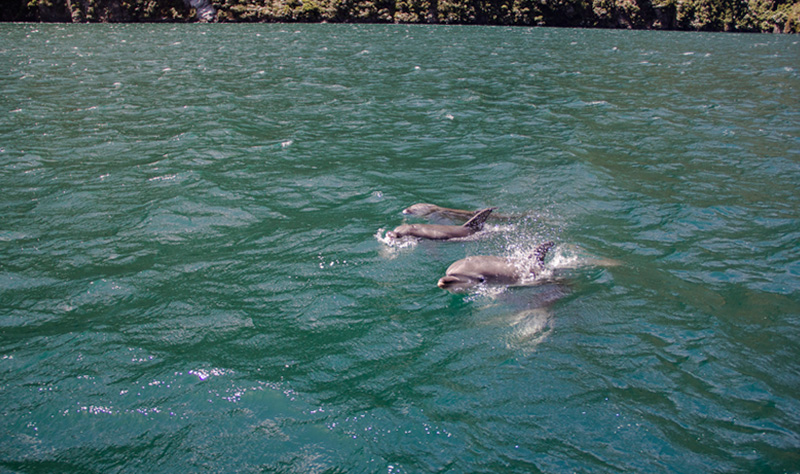 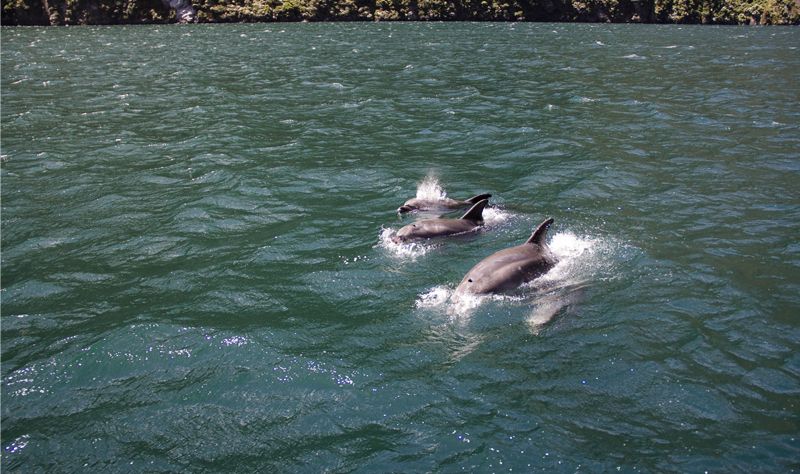 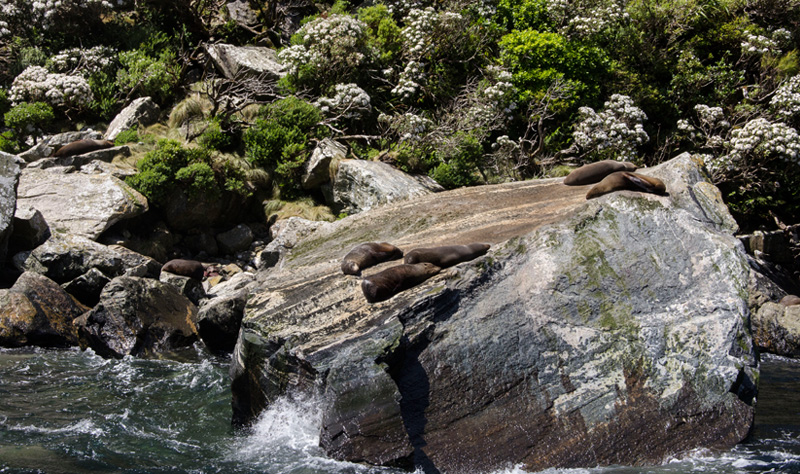 Even if the day was great, we regret we could not stay longer in the parc to enjoy the hikes and the landscape. So if you can and even if you don’t have any free camp around, just take the time to discover the area.