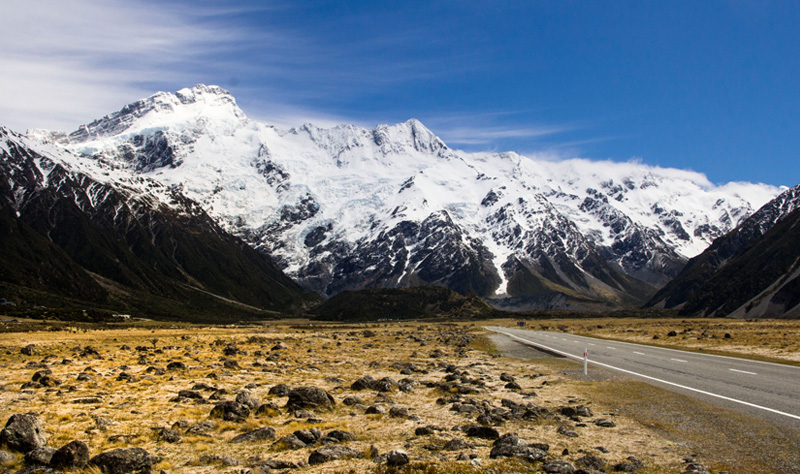 Our first discovery of the New Zealand’s countryside. We left Christchurch a bit quickly without understanding the potential of this city. Hopefully we came back there later.
We wanted to witness the so called New Zealand natural landscapes and we wanted to hit the road again. Once outside of Christchurch, it’s really wonderful to discover a green countryside, the mountains nearby and the sheep and cows cattle stations everywhere. Not many forest but green pastures. 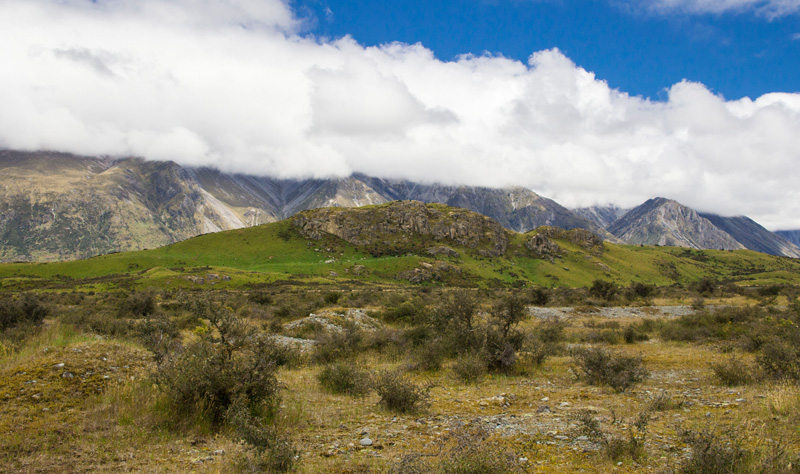 Our destination in mind, Aoraki/mount Cook of course, we did a special stop over. After driving 3h, we arrived at the mount Sunday, a classic place for the Lord of the Ring fans. They actually filmed the Rohan landscape and the Helm gulf here.
Without being a big fan of the movies even if I have to confess we watched the movies when we arrived in New Zealand, we were curious and excited to discover the scenery. 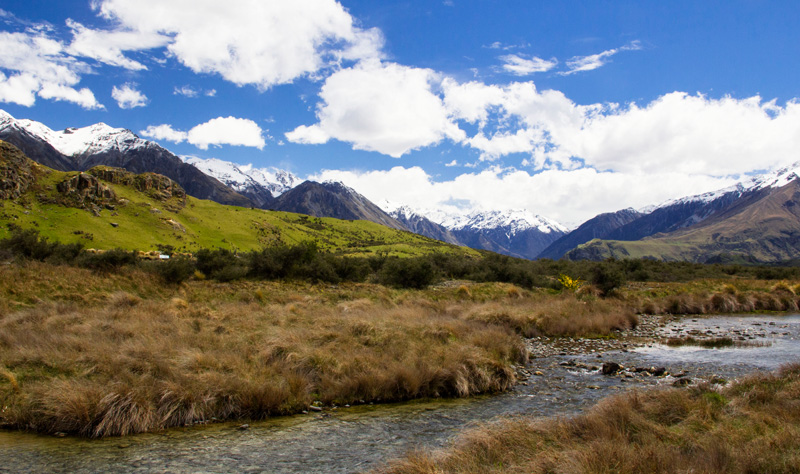 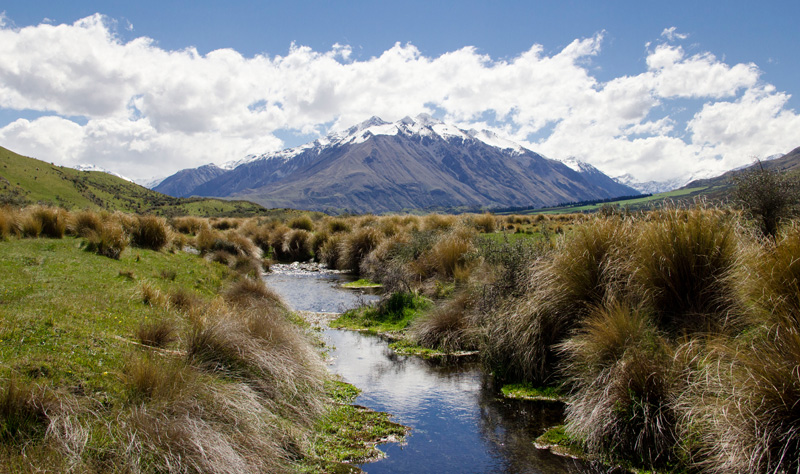 After 40 min drive on a gravel road, we arrived on top of the valley where you can see the little hill called mount Sunday where 10 year ago you could find the Rohan village of Edoras, the kingdom of the horse men.
For the record the team of the movie build it up in 7 month. 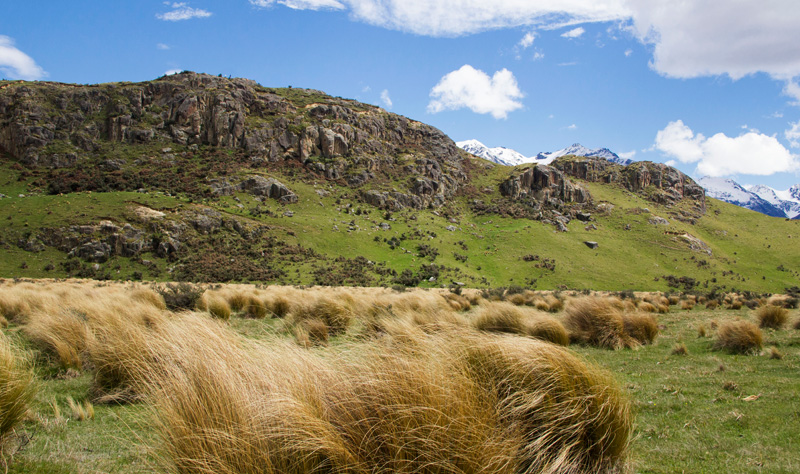 The mount is fairly easy to climb, as a result, it is here a simple and quick hike. We had the chance to be alone on the mount and enjoy the view of the the deserted plain surrounding by mountains, crossed by little rivers and invaded by tall yellow grass bunches.
If I say we had the chance to be alone it’s because we discovered some « Lord of the ring » tour are organized from Christchurch. 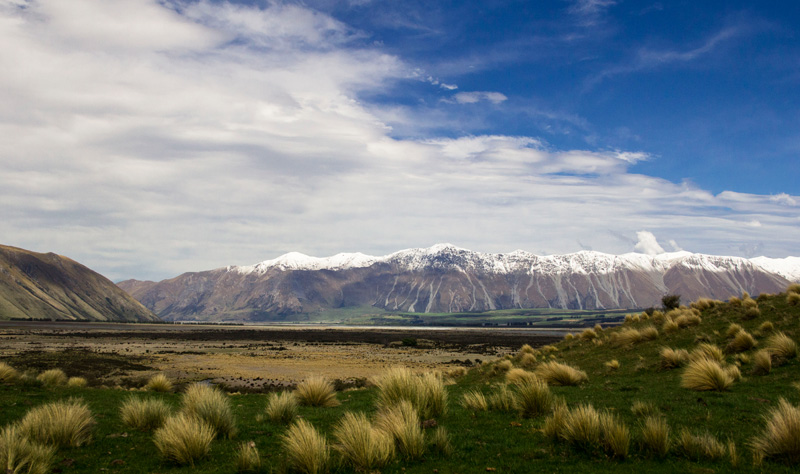 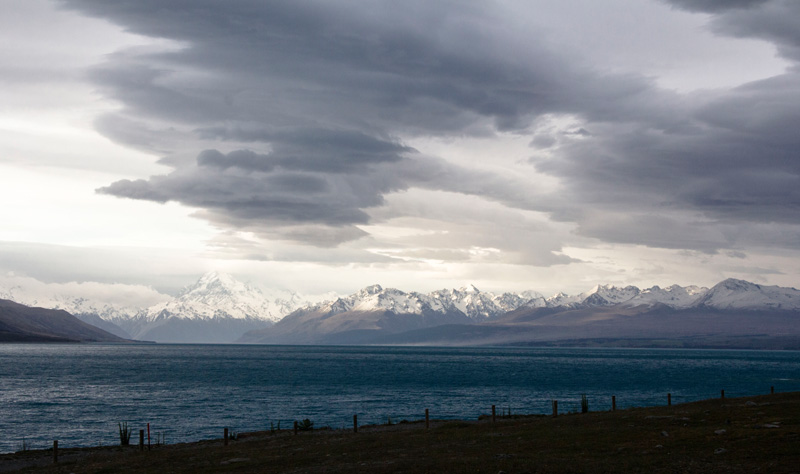 After our journey to the mount Sunday back on the roads towards Aoraki/ Mount Cook and Pukaki lake.

The Pukaki lake was our first stop when we arrived close to the mount, with its area of 178 km2 it’s the largest lake between Tekapo and Oahu. When the weather is best the lake create a perfect mirror where you can see the reflection of the mountain chain. 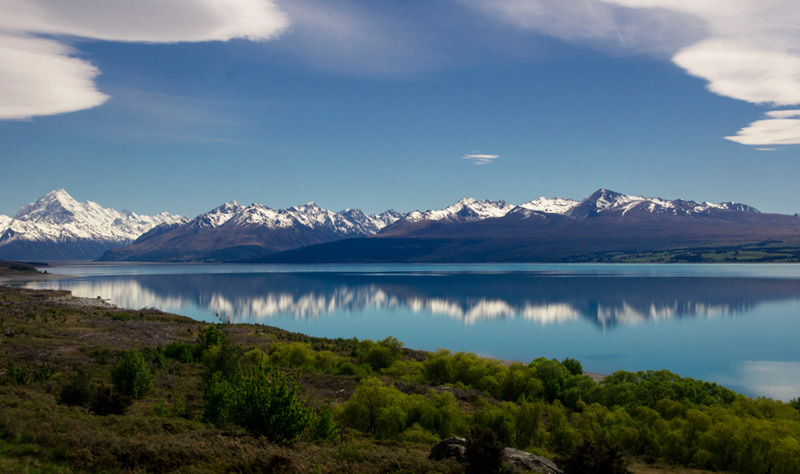 The road you have to use to go to the mount follow the lake and you can appreciate the turquoise color of the water due to melting glaciers. 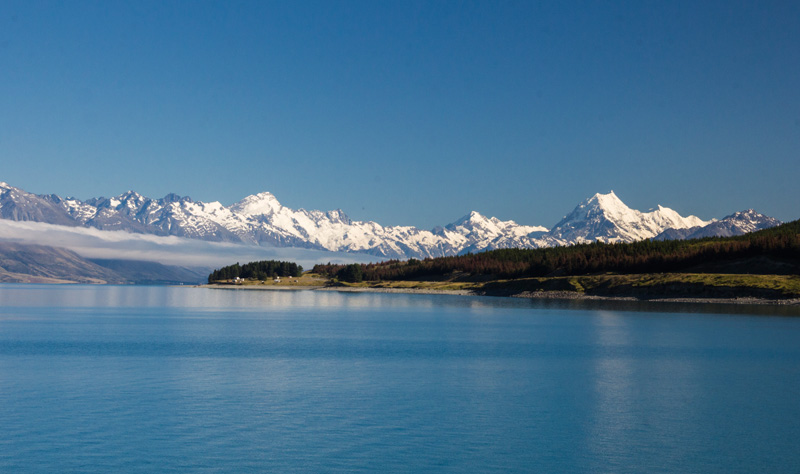 Since 1953 in Unesco World Heritage, the mount Aoraki/Cook is a part of the south Alps chain with 19 summits higher than 3000m and more. The mount peak reaches 3724m above the sea level, he lost in 1991 10m because of a landslide.
In 1998, the government gave back the land to the Ngai Tahu tribe. It’s the reason behind the dual name of this famous peak, Aoraki in maori, for whose it’s a bridge in between human and divine world and Cook for the europeans in tribute to the navigator (who discovered the country but never went to the mount, ironic isn’t it?) 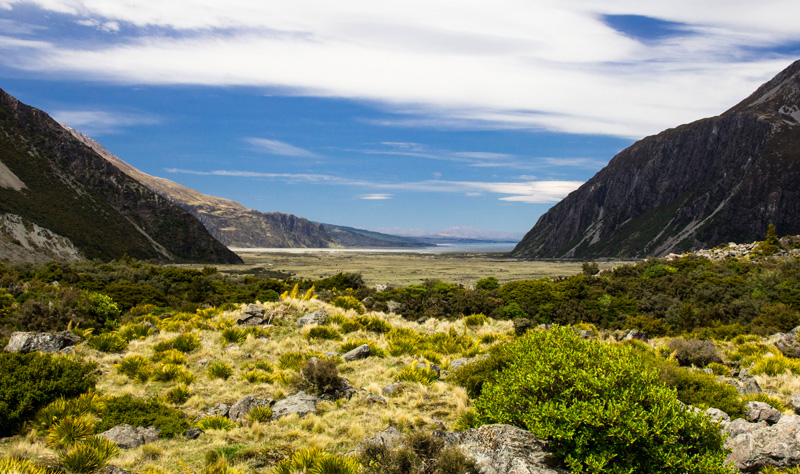 In 1894, the highest summit of New Zealand was climbed and a lot of mountaineers tried to climb it since even if the challenge cost the lives of over 200 people already.

We didn’t try to climb the mount, but hiked the Hooker Valley track. 3h return in a beautiful scenery with the mount constantly watching you.
We thought the walk would be a bit hard. Don’t be worried it’s absolutely not the case, its 3h are a little stroll with 3 suspending bridges to cross and a wooden walkway in the grass, probably to be able to get to the end of the track even on rainy days. 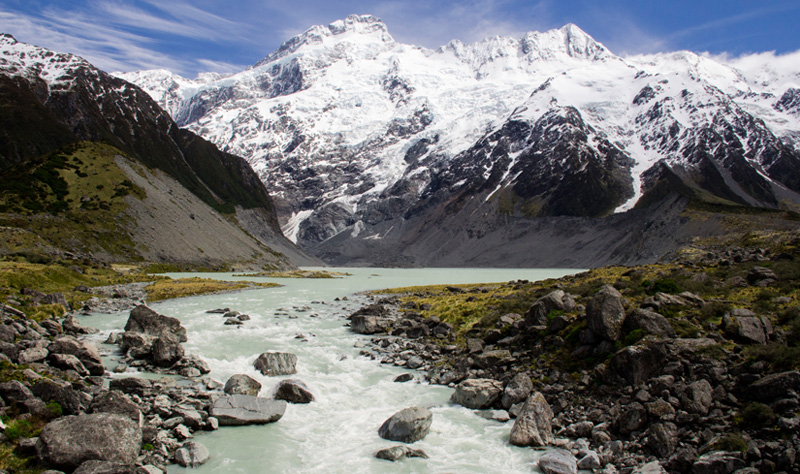 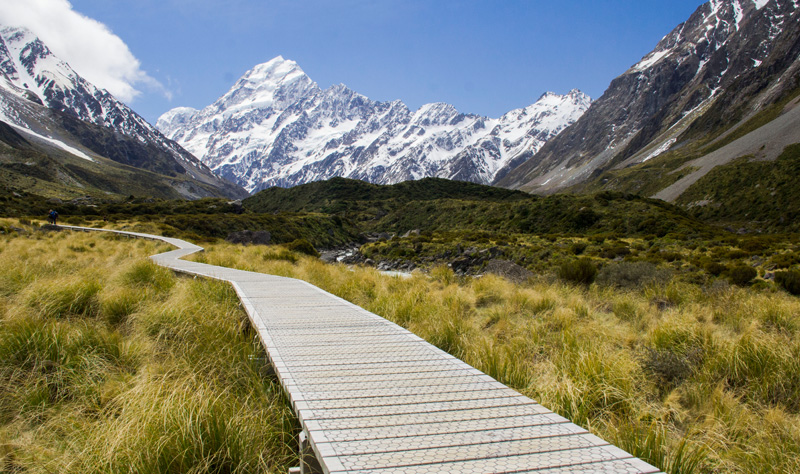 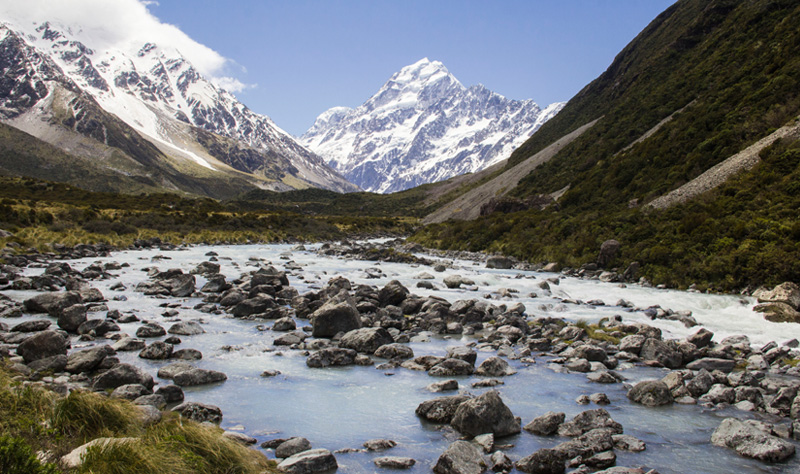 At the far end of the track, you will arrive at the bottom of the mount, in front of lake Hooker where you can see little icebergs. The water of the lake changes during the day, you can have a blue-grey water to a grey water only, the color of the melting glacier. Even if it’s a very touristic place, the walk is really worth it and stay an experience not to miss in the south island. 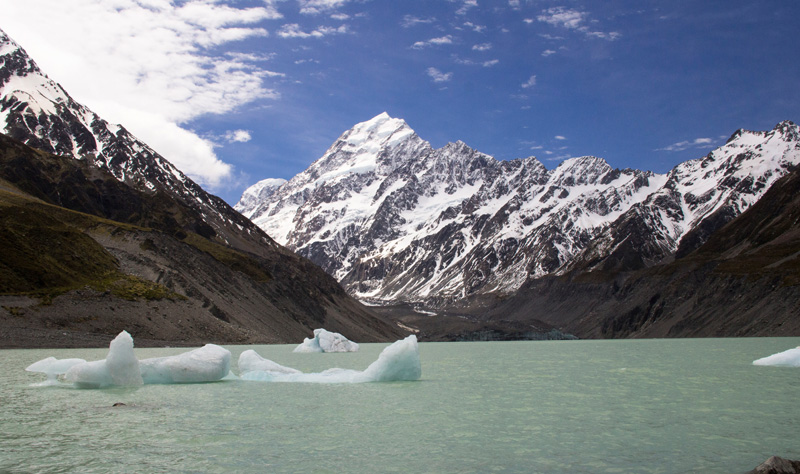 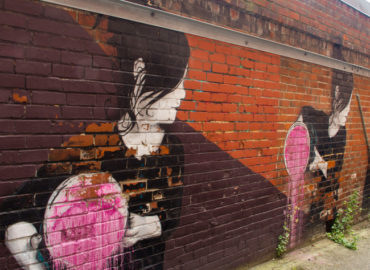 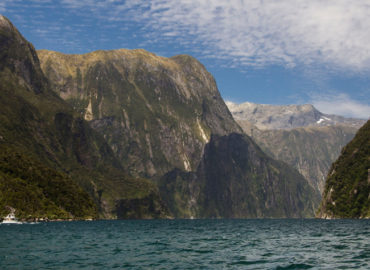 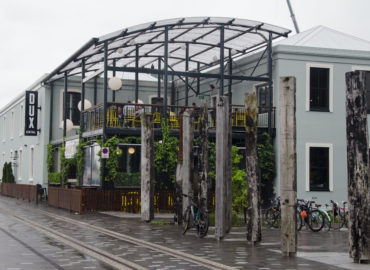